Along with the popularity of green idea that occupy the home, the word "anion" more and more frequently appeared in public view, and its emergence, and tend to "health" care "" "" in addition to formaldehyde and other associated together, even a lot of negative ion products manufacturer in the propaganda, have intention to not intentional of wrap anion as a cure-all fetish, how does the truth？

【I】，Where do negative ions come from:

In its natural state, air molecules are uncharged and neutral;However, under the action of cosmic rays, ultraviolet rays, trace element radiation, lightning and other external factors, the air is ionized, and molecules lose part of the outermost electrons rotating around the nucleus and become free electrons. When the free electrons are combined with neutral molecules in the air, negative ions with negative charges are formed; 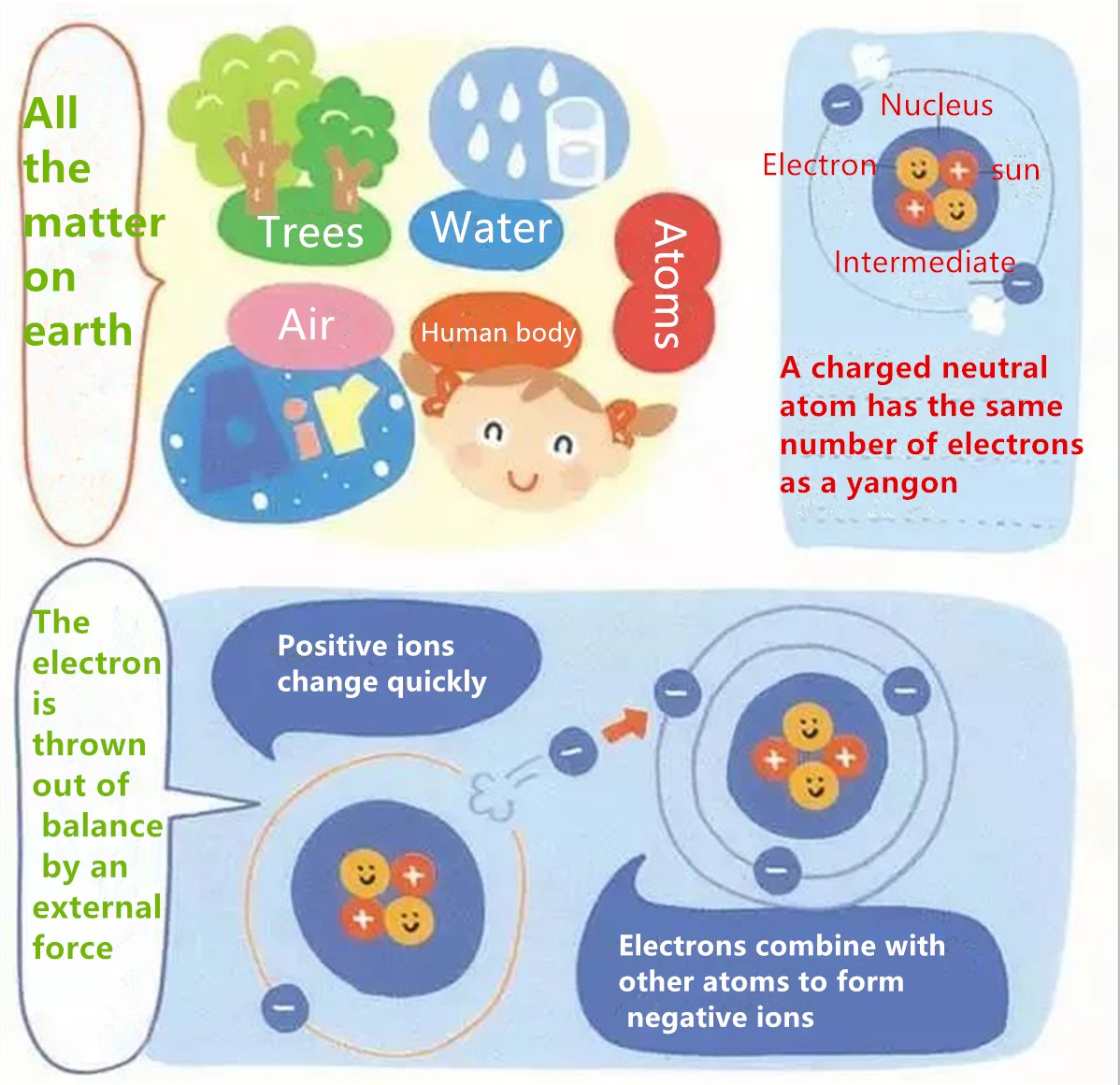 production of anions generally has the following ways: cosmic rays, ultraviolet rays, lightning and other natural phenomena, which has just been mentioned above;Another is waterfall impact, water under the action of gravity for intense impact, a large number of water molecules split and produce negative ions;There are plant branches and leaves tip discharge and green plant photosynthesis formed by the photoelectric effect, ionization of the air and the generation of negative ions.This means that waterfalls and plants have a lot of negative ions; 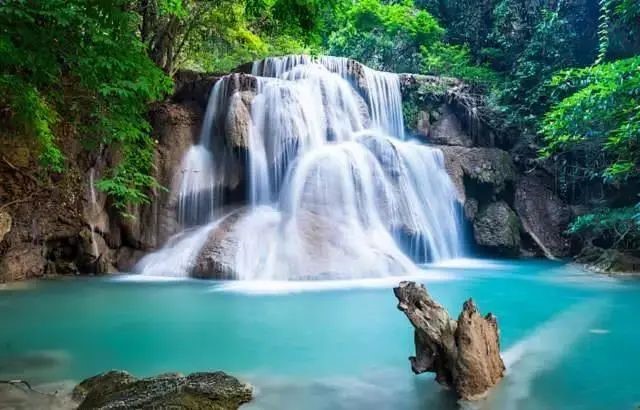 ▲There are a lot of negative ions around the waterfall：

Now, with the development of science and technology and the progress of technology, people have already is not limited to, relying on the natural factors for negative ion can also through the electrical equipment to generate negative ions indoors, one way is to use high voltage to make the air ionization and produce anion, another method is the use of natural minerals, such as tourmaline, after processing, by changing the temperature and pressure can release negative ions;

Through the above, we understand the definition of "anion" and the principle of generation, next, we will take a look at it is how to sterilization, purification.First of all, it should be clear that sterilization and purification are two different concepts: sterilization, is through some measures to prevent the growth and reproduction of bacteria, and eventually to its death;Purification refers to the removal of unwanted impurities to make an object or space clean, such as air purification; 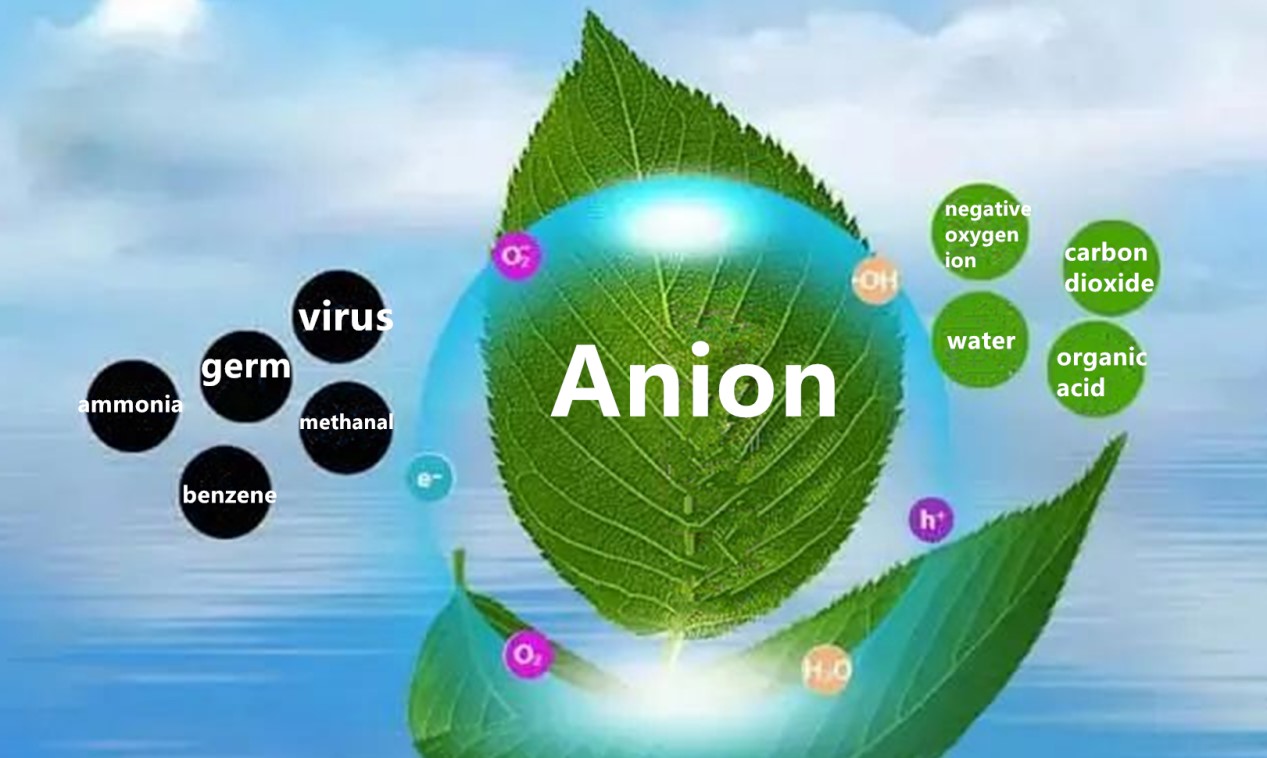 negative ion in the air (negative oxygen ion) and bacteria, mold, virus and other contact, because the negative ion itself carries excess electrons, will destroy their molecular protein structure, make it produce structural changes (protein polarity reversal) or energy transfer, so that bacteria and viruses and other microorganisms die.However, the right concentration of anion is not only harmless to human body, but also beneficial to human health (which will be detailed below), so "anion sterilization" is more environmentally friendly sterilization than ozone or ultraviolet sterilization;

Anion, as a charged particle, its purification principle is to take advantage of the charged body has the property of attracting light small objects.This is common in life, such as fur rubbing rubber stick can absorb small scraps of paper, or combing hair with plastic comb can absorb hair, etc; 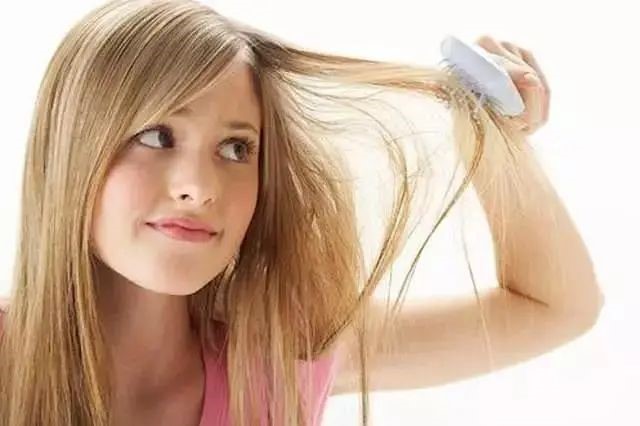 ▲Combing your hair with a plastic comb often traps hair：

Principle of air purification is that the air negative ions can make the air invisible to the naked eye (particle size small to 0.01 micron) particles and drifting dust, peculiar smell molecules, through positive and negative ions mutual attraction, collision, neutralization, and the formation of neutral molecular group, sinking landing, dust removal, deodorization, purification effect.Have an experiment to prove, when the concentration of anion in indoor air achieves 20000 when every cubic centimeter, the fine particle in the air sends dust quantity to reduce 98% above.What we should note here is that the negative ion only condenses and sinks the dust particles in the air, and does not remove them from the root; 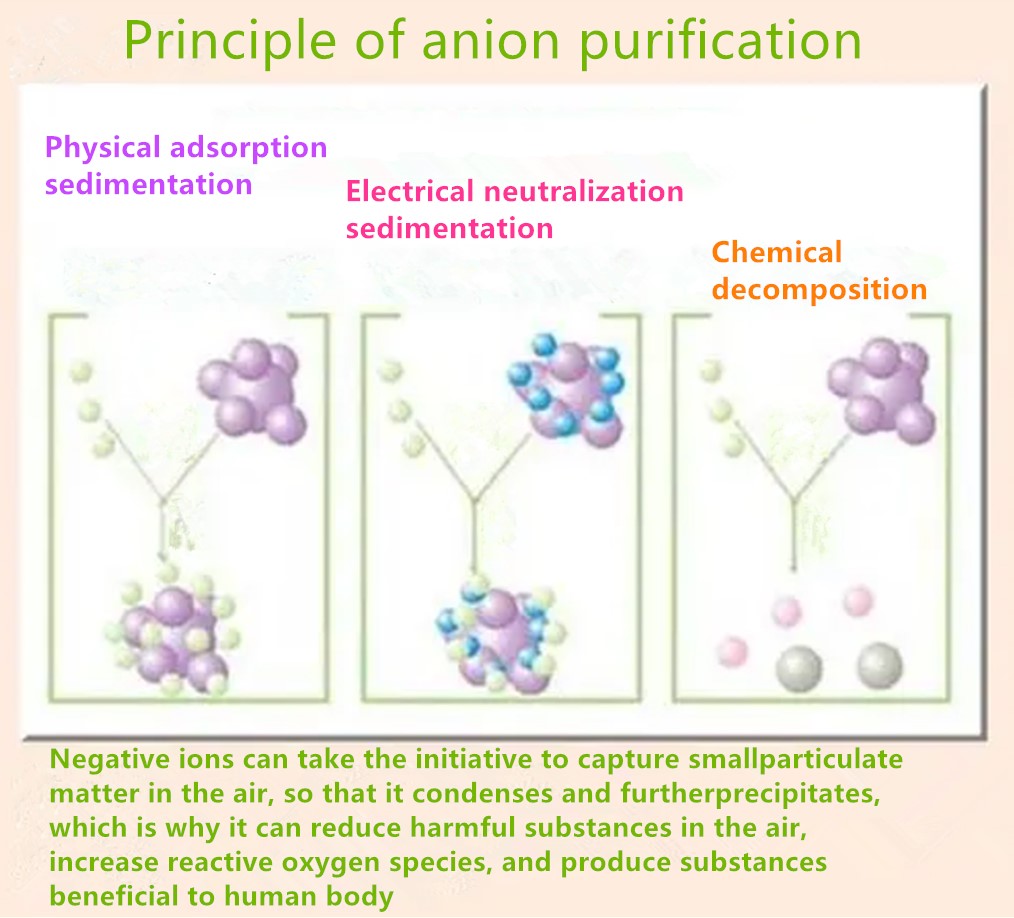 In addition, anion can also play a certain role in cleaning up indoor decoration pollution.Due to the characteristics of small particle size and high activity of anions, the diffusion of gas can quickly spread to every corner of the room, and actively combine with the pollutants in the air，For example, formaldehyde, toluene, TVOC and other decoration pollutants react and decompose them into non-toxic carbon dioxide and water, which can alleviate decoration pollution residue to a certain extent.The reason is to a certain extent, because the release of volatile pollutants such as formaldehyde is a slow process, for many years, along with being removed and will continue to produce, so the house just decorated, must be supplemented by regular window ventilation, accelerate the evaporation of formaldehyde; 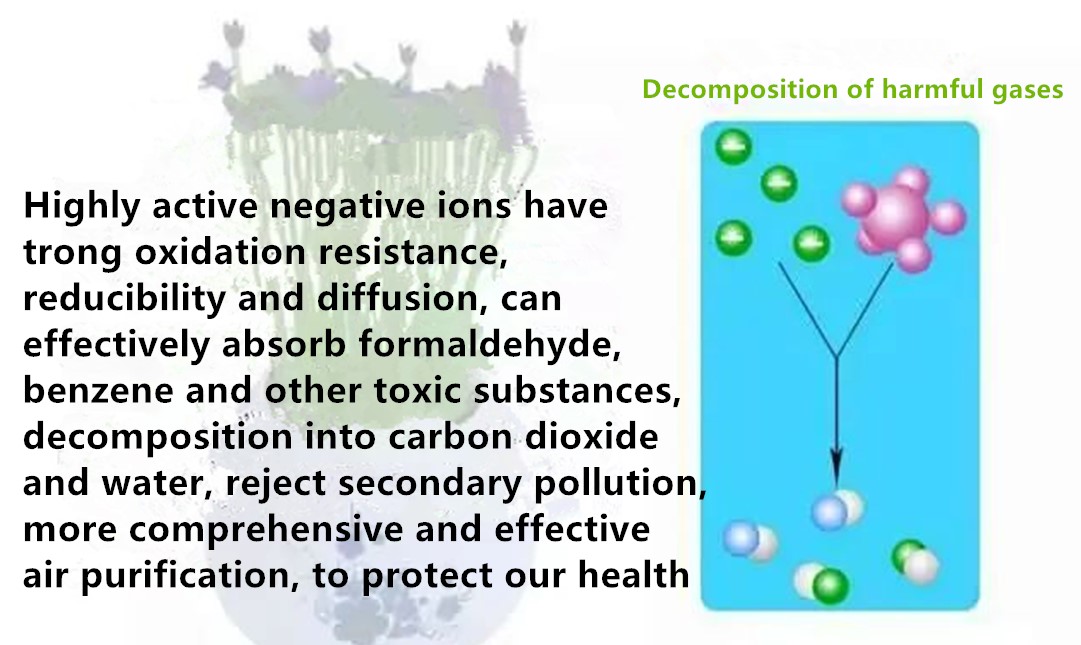 To sum up, it can be seen that, in theory, anion does have a certain sterilization, purification effect, its sterilization is more environmentally friendly, safer for the human body;Its purification effect is commendable, achieve "molecular" way of purification, to better reflect the efficacy of TVOC, such as formaldehyde, benzene, etc is decomposed into carbon dioxide and water, safe environmental protection, however, it is important to note that negative ions for fine particulate matter "remove", just bring it down heavy, on the surface or ground, has not completely removed; 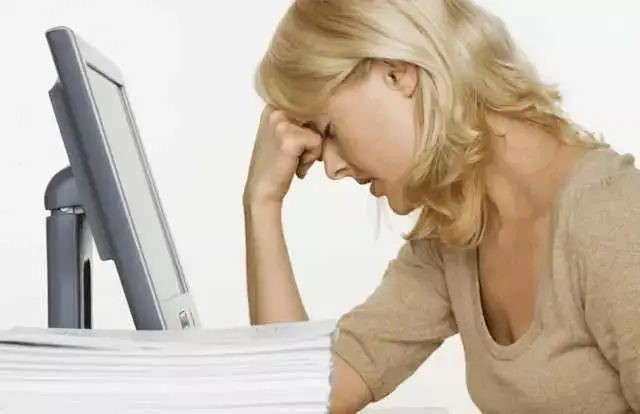 To explain this, we have to start with our bodies.The normal adult body is made up of approximately 40 trillion to 60 trillion cells, and the body's normal vital signs depend on the stability of the cellular level. Each cell is surrounded by a membrane through which it absorbs nutrients and wastes.There are a lot of negative ions on the inside of the cell membrane, and there are a lot of positive ions on the outside. When the balance between positive and negative ions is achieved, the internal cell can function normally;

Once the cells are too many positive ions, it will affect the absorption of nutrients and aging cells and waste discharge, the physiological function of the cell itself will decline.Modern ion medicine research shows that positive ions will make organisms produce strong oxidizing reactive oxygen species, but also lead to acidic organisms, so when the positive ions into the body increase，Easy to cause physical discomfort, resulting in fatigue, vasoconstriction, increased blood pressure, poor blood circulation, increased breathing and pulse times, etc., and many adverse effects.Why can that anion have health care effect, this is because anion can neutralize the positive ion harmful to human body, thus ensuring the normal physiological function of the organism, so, the anion of appropriate concentration is beneficial to health; 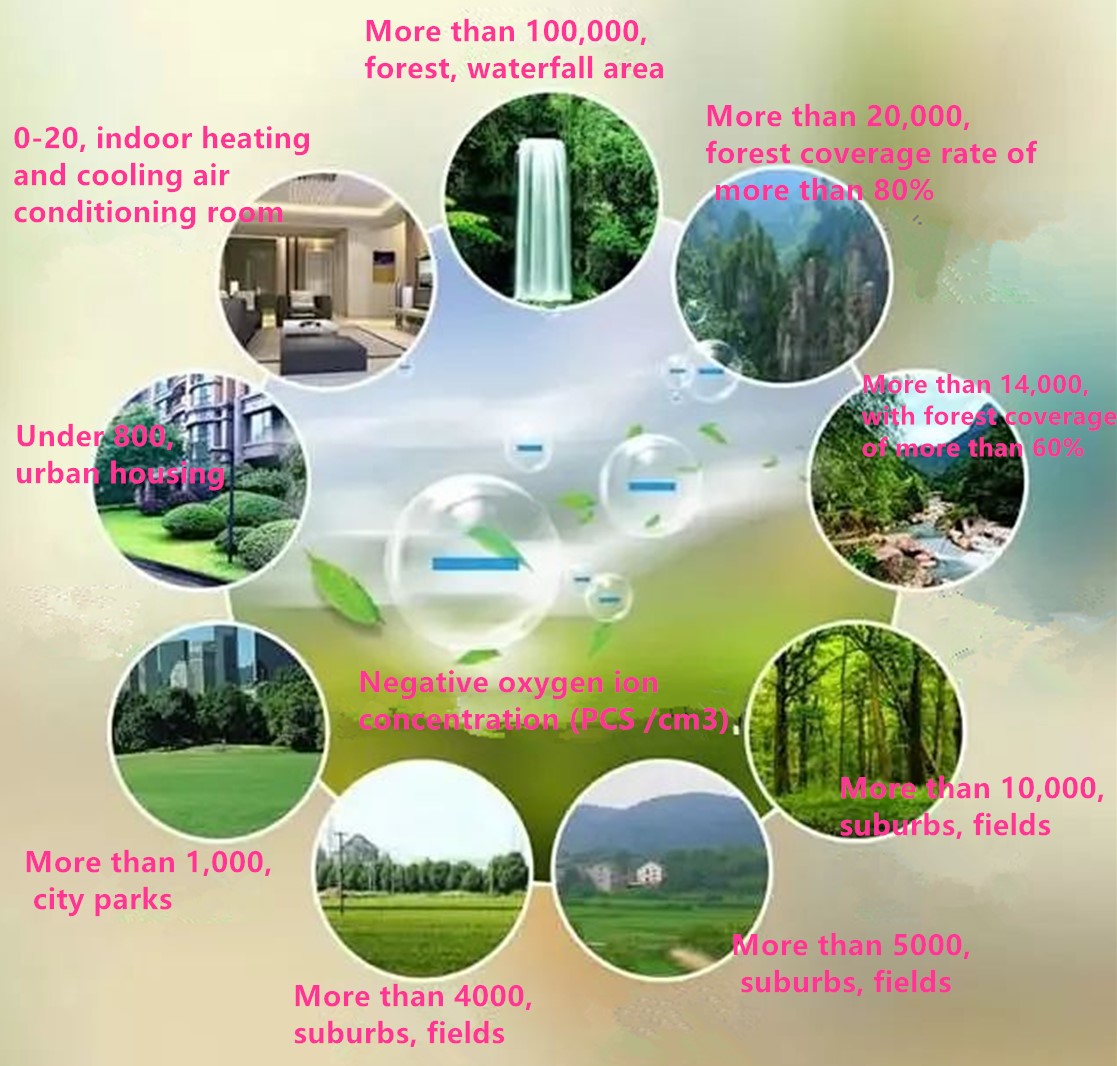 For example, when we are near waterfalls, in forests, in suburban fields, after lightning and rain, we can usually feel the air is very fresh, fresh mind and smooth breath. This is because the air contains a large number of negative ions.While in airtight air conditioning room, heating room or downtown, industrial area and some crowded places for a long time, people will feel chest tightness, dizziness, fatigue, poor breathing and other adverse symptoms, because the concentration of negative ions in these places is low; 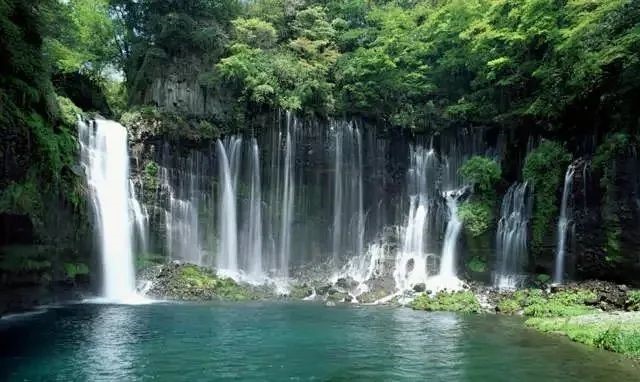 ▲Where there are more anions, the air is fresh and breathing is comfortable：

It should be noted that the role of negative ions is to improve, or to prevent, and can play a certain auxiliary role in the treatment of some specific diseases, but it does not completely cure the disease alone, not like some advertising can "cure all diseases" as magical.Therefore, once sick body discomfort, we should first go to the regular hospital for medical treatment, do not blindly believe the curative effect of "anion";

*This network published articles, pictures, part of the reprint, copyright belongs to the author